Despite surge, Covid bed occupancy in UT only 23% 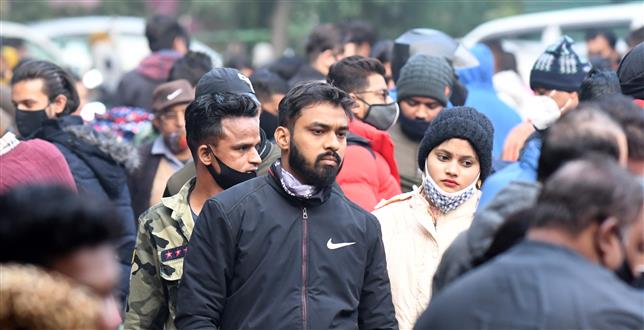 Despite surge, Covid bed occupancy in UT only 23%

The daily cases continue to swell in Chandigarh, leaving the Covid-19 beds at designated hospitals 23 per cent occupied now. While there were 4,808 active cases in the city on Wednesday, only 2 per cent (109) were hospitalised and the remaining were in home isolation.

Chandigarh has 1,206 designated Covid beds for the third wave and 278 of these have been occupied by patients from Chandigarh and nearby states. During the second wave, the bed occupancy had increased manifold and the hospitalisation rate had gone up to 20 per cent. Many patients had died for want of Covid ICU beds. The hospital occupancy at any given time was between 85 per cent and 100 per cent when the active cases had peaked at 5,000 in May last year.

As many as 66 per cent patients were in the bracket of 13 to 40 years, followed by 23 per cent in the age group of 41 to 60. Eighteen patients were admitted to Covid-19 ICUs and 13 to the paediatric Covid ward.

The peak requirement of medical oxygen is estimated at 49.5 MT in the third wave and the UT has 53.8 MT oxygen production capacity installed already. No concern of oxygen requirement has been flagged by any hospital as of now.

Hospitalisation rate was 20% in 2nd wave

During the second wave, the hospitalisation rate was 20%. Many patients had died for want of ICU beds. The hospital occupancy at any given time was between 85% and 100% when the active cases had peaked at 5,000 in May last.

As of now, the public perception is that Covid infection in the ongoing wave is mild. The lesson learnt from the past experience is that the Covid scenario is dynamic and keeps evolving. So, we need not lower our guard. — Banwarilal Purohit, UT Administrator

‘We need to be careful’

We are seeing a sharp rise in cases. So far, the cases have been largely asymptomatic. However, we have the elderly and those with co-morbidities. We need to be careful as mild disease can affect them. — Dr Suman Singh, DHS, UT