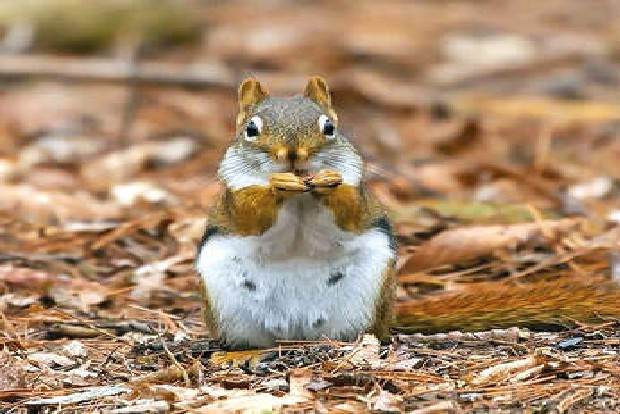 These young squirrels are much more likely to survive until the spring.

Some North American red squirrels are born with a silver spoon in their mouths. They live in pine forests where the adults defend caches of food. Without a cache of their own, many baby squirrels won’t survive the winter. But each year, some squirrel mothers abandon their territory, bequeathing all their food to one or more babies who stay behind. These young squirrels are much more likely to survive until the spring.

Across the animal kingdom, there are other examples of species that share resources such as territory, tools and shelter between generations. In a paper published last month in Behavioural Ecology, a trio of researchers argue that we should call this phenomenon the same thing we call it in humans: intergenerational wealth. Those young, pine-cone-rich squirrels, the scientists say, are children of privilege. When George Orwell wrote in “Animal Farm” that some animals were more equal than others, he was trying to shed light on the human ideological conflicts of the time. The researchers hope to use the analogy in the opposite direction. Applying a human lens, they say, can help us understand the roots of inequality in animals.

Jennifer Smith, a behavioural ecologist at Mills College in Oakland, Calif., said the idea for the paper arose early in the pandemic, in conversations that she and colleagues at the University of California, Los Angeles, had over (of course) Zoom. They saw how Covid-19 was highlighting health disparities and other inequalities around the world. The scientists began to wonder if they could learn more about inequality by studying it in animals. “When we started looking for it, we found lots and lots of examples,” Dr. Smith said.

Young red grouse are more likely to succeed in establishing their own territories when their fathers and other kin are nearby. Hyena daughters born to high-ranking mothers inherit their status, and get dibs on fresh meat. Some chimpanzees and capuchin monkeys crack nuts using stone tools that their parents used before them.

Animal wealth may be passed down to non-relatives, too, as in paper wasps that take over shared nests or hermit crabs that seek better real estate. To study wealth transfers between animals, scientists can ask concrete questions: Does a lizard that lives with its parents survive longer? Does a monkey with access to larger nut-cracking rocks go on to have more children and grandchildren? Biologists can explore animal privilege without tackling all of the topic’s cultural complexities in humans.

By seeking similarities between privilege in people and animals, Dr. Smith hopes to unlock a greater understanding of inequality in the natural world. “For me, it’s very exciting to study the rules of inequality in non-human animals,” she said. “To see this across so many different species was quite surprising. And we’re just touching the surface.” Next, she’s planning to expand her survey, looking at wealth and privilege across thousands more animal species.

“The use of terms like ‘privilege’ and ‘perpetuating the cycle of privilege’ is a little bit unusual” in animal research, said Jenny Tung, an evolutionary anthropologist and geneticist at Duke University who focuses on how social factors affect health in primates. “In part because they’re a bit loaded for us as humans to read.” But she thinks the idea of using a human lens to look at how animals pass down resources has promise. “That is potentially tremendously useful,” Dr. Tung said. The idea “opens up a whole tool chest of ways to understand” where inequality comes from among animals, she said.