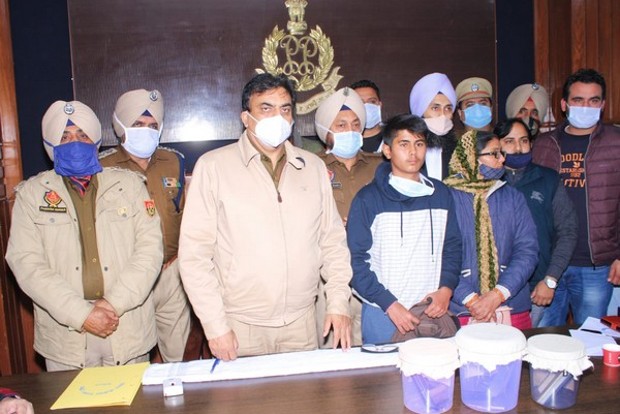 Ferozpur Police arrested three persons for allegedly kidnapping a 16-year-old child. As per a press release by the police, the accused have been identified as Karan (23), Raj Singh aka Rohit and Amarjit Singh (22).

However, the fourth accused, their accomplice Akash aka Jani managed to flee. The Police have also recovered two pistols along with two cartridges, one motorcycle, the victim's scooter and three mobile phones from the possession of arrested accused persons. Giving details, SSP Dr Narinder Bhargav said that Advocate Sanju Sharma of Ferozpur lodged a complaint with the Ferozepur police that her 16-years-old son went to tuition on his scooter in Ferozepur Cantt and did not return home and his mobile phone was also switched off.

He said that Sanju Sharma had received a video message and audio message on WhatsApp in which her son was saying that he has been kidnapped, and kidnappers are demanding ransom. She also received a WhatsApp call saying that if she wanted her son back then arrange Rs 5 lakh or else they would kill their son, the SSP said. Acting promptly, Dr Bhargav formed a four teams under the supervision of SP Investigation Manvinder Singh. The teams were comprising of DSP Investigation Jagdish Kumar, CIA Incharge Inspector Jagdish Kumar and Incharge Narcotic Cell Inspector Parminder Singh Bajwa and SHO City Police Station Manoj Kumar.

The SSP said that using technical assistance and intelligence, the team has managed to trace the child and nab the accused in less than six hours. "While, Rohit and Karan were nabbed on a motorcycle, Amarjit was arrested from a Cattle barn built in village Doomni Wala from where the child was also recovered," he said adding that efforts are being made to arrest the fourth accused identified as Akash, who managed to flee from village Doomni Wala.

During the preliminary investigation, the accused alleged that the victim had molested their sister that's why they are taking him to make him feel sorry. Meanwhile, FIR has been registered under sections of 364-A of the Indian Penal Code at Police Station City Ferozpur, while, sections 25, 54, 59 of the Arms Act were added later. The accused will soon be produced before the Court and will be remanded in police custody. Pertinently, Karan was also wanted in FIR dated 04.09.2021 under sections 341 and 34 of the IPC and 25/27/54/59 of the Arms Act at Police Station City Ferozpur.