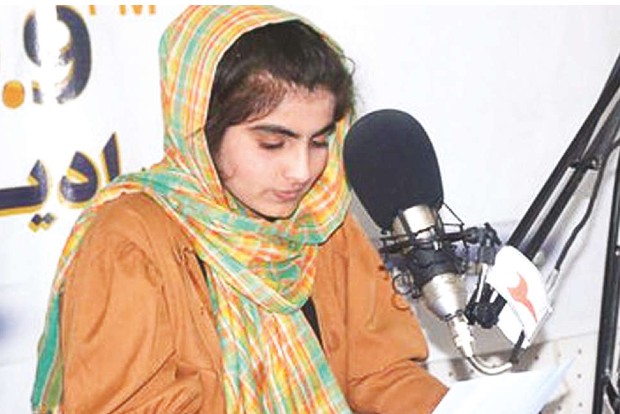 Thousands of journalists have lost their jobs in Afghanistan over the past few months, with many media outlets ceasing operations due to increasing security and financial challenges

Selma (name changed) was a journalist and activist living and working in Panjshir province in northeastern Afghanistan. She, like many others, lost her job following the Taliban takeover of the war-ravaged country in August. After being threatened, she left the region and is now in hiding, selling bolani, a local flat bread, on the streets to survive. “I worked as a journalist and human rights activist,” said Selma, who asked DW not to reveal her true identity for fear of reprisals. “As you know, women’s rights are strongly related to religious ideologies, so we were always in dispute with extremists. This put us in danger.” Selma is one of the thousands of journalists and media workers who have lost their jobs in Afghanistan since August.

According to a report published in December by Reporters Without Borders (RSF), 40% of media outlets have closed over the past five months with an estimated 6,400 journalists losing their jobs. Hundreds have fled the country. The report added that over 80% of female journalists are now out of work. Some provinces in Afghanistan have been left with only a handful of media outlets, and those that remain have stopped broadcasting music, pulled foreign content and taken female hosts off the air.

Most have also softened their news coverage out of fear of closure or worse, and now broadcast strictly religious content. Afghan citizens who enjoyed a variety of media choices over the past two decades now have little access to critical news and information. “Without a free press capable of exposing bad governance’s failings, no one will be able to claim that they are combating famine, poverty, corruption, drug trafficking and the other scourges that afflict Afghanistan and prevent a lasting peace,” Reza Moini, the head of RSF’s Iran-Afghanistan desk, said in the report.

In the face of a crumbling media landscape, Taliban officials have been telling the international community that they stand for press freedom and that journalists are not under threat. In a television interview with DW, the spokesperson for the Foreign Affairs Ministry, Abdul Qahar Balkhi, said Afghanistan has a “very free and vibrant press.”

“Unfortunately, I do have to say that some media houses have closed down, but that is not because of us,” said Balkhi, adding that they were largely the result of a loss of donor funding. This positive take on the media situation was echoed by Abdul Wahid Rayan, spokesman for the Information and Culture Ministry. “We have meetings and collaborations with journalists and media owners all the time, and anyone who has any problem can share it with us,” told DW. “We believe in freedom of the press.”

Since the Taliban took power in August, no Western country has recognised the new government. This has made it difficult for the Islamic fundamentalist group to access international capital and funding.

Even in the face of a looming humanitarian crisis and growing calls for support from the United Nations, foreign governments have so far not recognised the Taliban administration and provided support. Some observers see the Taliban’s stated support of a free press in the country as part of a larger strategy to attract international recognition.

One long-time media observer, who fled to Europe in August and asked not to be named as he fears retribution against his colleagues in Afghanistan, supported this argument. He told DW if any journalist is arrested or tortured, and it is covered in the international press, it would hurt the Taliban’s goal of international recognition.

“My organisation has documented dozens of acts of violence against journalists and in not a single case has there been anyone brought to justice,” he told DW. “We feel that any talks with the new government should include the situation on the ground with regard to press freedom as a basic human right.” Following the US invasion of Afghanistan in 2001 and the relative peace that came with it, hundreds of media outlets sprung up in all corners of the country.

With funding sources ranging from international donors to local politicians, to indigenous advertising revenue, the country’s media landscape expanded to become the most diverse in the region. The largest commercial television station in the country is TOLO TV, which is owned and operated by MOBY Group.

The station was launched in 2004 and it, along with its affiliates, continues to broadcast across Afghanistan. Saad Mohseni, chairman and CEO of MOBY Group, told DW that there are a range of factors contributing to the shutdowns of media outlets, including the loss of grants from the international community, loss of advertising revenue, lack of staff and intimidation in the provinces.

Though he remains hopeful for the media sector, Mohseni said the daily directives coming from various Taliban ministries were making it difficult for broadcasters to know what can and cannot be aired. “We have to take it one day at a time,” he said. Ezatullah Akbari, a member of the media watchdog Nai — Supporting Open Media in Afghanistan, has worked with many of the media outlets outside of Kabul that have since closed. He said the country could soon lose the majority of its journalists, many of whom he trained. “A lot of journalists are just leaving Afghanistan as they are out of work and out of money,” Akbari told DW.