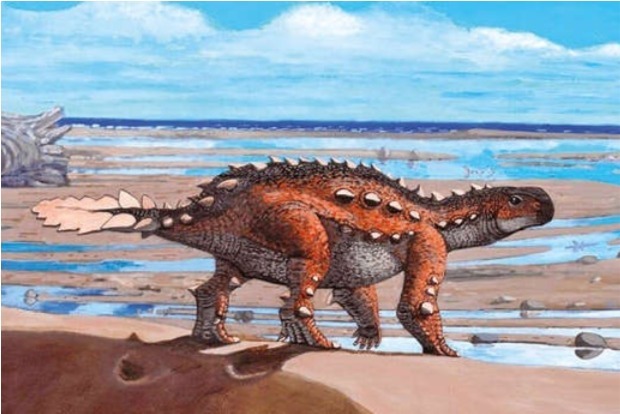 It’s not every day you find a dinosaur that defended itself from predators with a completely unique weapon.

In a study published Wednesday in Nature, Chilean researchers announced the discovery of a new species of ankylosaur, a family of dinosaurs known for their heavy armour, from subantarctic Chile. The animal, which they named Stegouros elengassen, offers new clues about where these tank-like dinosaurs came from — and features a bizarre, bony tail shaped like a club that was wielded by Aztec warriors.

“It’s lacking most of the traits we’d expect from an ankylosaur and has a completely different tail weapon which shows there’s something very idiosyncratic happening here in South America,” said Alexander Vargas, a professor at the University of Chile and a co-author on the study.

A diverse collection of ankylosaurs once roamed in great numbers across Laurasia — the northern super-continent that once contained North America and Asia. Even in a group of animals famous for its inventive approach to defense, the ankylosaur family stands out. Splitting from their closest relatives, the stegosaurs, in the mid-Jurassic, ankylosaurs developed hides covered in bone deposits called osteoderms, which formed lattices of tooth-breaking armour. The most famous species of ankylosaur evolved shin-shattering tail clubs like the maces of ancient warriors.

But their relatives from the southern continent of Gondwana — now South America and Antarctica — are less well studied, Dr. Vargas said. Since these are believed to include the earliest members of the group, the origins and early evolution of the family have been an enduring mystery. In February 2018, a team of paleontologists from the University of Texas stumbled across a set of bones in the frigid, wind-blasted valley of Río Las Chinas, on the southernmost tip of Chile. Despite its forbidding nature, the site is a beacon for paleontologists: Dr. Vargas has spent the last decade working there with researchers including Marcelo Leppe from the Chilean Antarctic Institute, dating rocks and looking for fossil hot spots.

There were only five days left in the field season when the Texas paleontologists alerted Dr. Vargas and Dr. Leppe to the find. Working at night under very cold conditions, they hauled the block of fossils downhill to the campsite. One person got a sprained ankle and another broke a rib. Many people came close to hypothermia.

But what came out of the block was worth it. Preparation revealed an unusually complete ankylosaur: 80 percent of a skeleton, including a largely articulated back half, as well as vertebrae, shoulders, forelimbs and scraps of skull.

In life, Stegouros would have been about six feet long, with a proportionally large head, slender limbs and a strange short tail, tipped with seven pairs of flattened, bony osteoderms that form a single structure. That tail weapon — which Dr. Vargas compared to a macuahuitl, the obsidian-studded bladed club of Mesoamerican warriors — seems to have evolved independently of other ankylosaurs. Early ankylosaurs from the north have no tail clubs, and later ones developed them through the evolution of stiffened vertebrae, forming the “handle” of the blunt tail club.