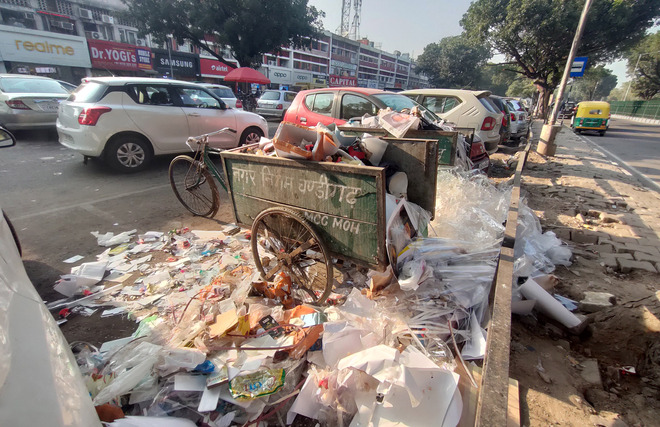 The poor show of Chandigarh in the Swachh Survekshan has not only given fresh ammunition to the opposition parties, but it is also going to be one of the major issues in the run-up to the Municipal Corporation elections.

Both the Congress and the new entrant AAP have planned to take on the ruling BJP on the issue of poor ranking of the city in the cleanliness survey.

The Congress has even planned to give the issue a priority in its campaigns, pamphlets, videos and speeches in an attempt to send this message to the public.

“It is not our, but a public issue. People in Chandigarh are very touchy about cleanliness. The BJP did not discuss the issue in the House. They should have brought a white paper in the House over falling ranking in the past few years,” said Subhash Chawla, president, city Congress.

Chawla also questioned the MC move of paying nearly Rs4.50 crore per month to a private sanitation agency. “The work could have been done by the MC by spending Rs2 crore,” he added.

The AAP said clearing garbage from the dumping ground would be its second guarantee to the city residents. City AAP convener Prem Garg said, “The 66th rank is embarrassing for councillors, officers and the MC itself. It has made people question the existence of the MC. They are paying a huge amount to a sanitation firm and still failing to improve the ranking. We will not give work to that firm. We will bring these issues before the public through various campaigns. It will be a major poll issue,” he added.

Mayor Ravi Kant Sharma, also a BJP councillor, said, “It is not that the city is not beautiful or clean anymore. It is just that the category under which the city was judged kept changing every year. We have already started to clear the legacy waste at the dumping ground and are in the process of setting up a new processing plant as well as an animal incineration plant. We also introduced vehicles for garbage collection.”

“At least we have started or are in the process for improvement, while the Congress had failed to do it. They only gave dumping ground and a defunct processing plant to the city,” he added.

The city got the overall 66th rank in the Swachh Survekshan-2021 and in the category of cities having population above 10 lakh, it was placed 16th. It is a big fall for the city as it was ranked second in 2016.