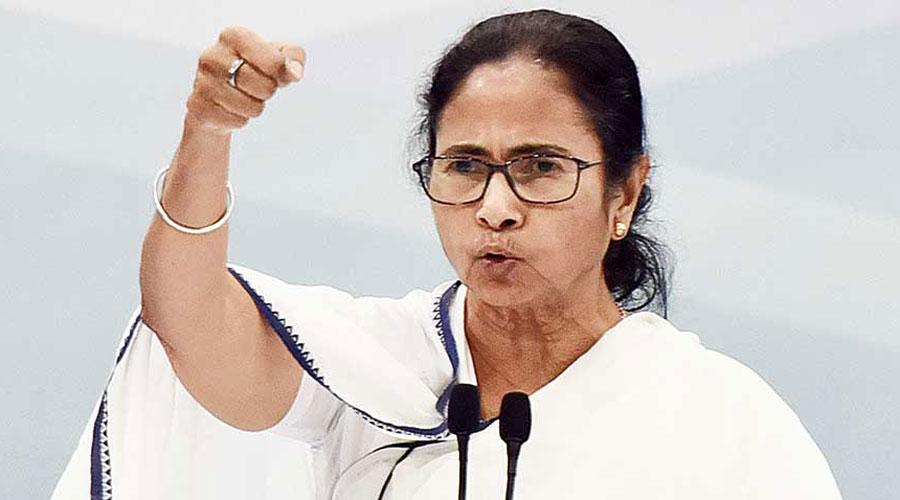 On a day when two security personnel were arrested in connection with the murder of Anis Khan, West Bengal Chief Minister Mamata Banerjee on Wednesday promised an impartial investigation into the case which will take to book all those involved in the killing of the student leader on February 18.

The Chief Minister also warned that the government will not allow any kind of mismanagement or misrule in the state.

Addressing a press conference at the state secretariat Nabanna, Banerjee said, "I shall not tolerate any kind of mismanagement or misrule in the state. We have started the investigation to find out who all are responsible for the murder in Amta. Two security personnel have been arrested. They have been taken to custody. We are doing everything to ensure an impartial investigation into the matter."

The Chief Minister was referring to two security personnel connected to the Amta police station in Howrah district -- Home Guard Kashinath Bera and civic volunteer Pritam Bhattacharya -- who were arrested by the police on Wednesday morning in connection with the Anis Khan murder case, giving strong indication that police were involved in the murder of the student leader on February 18. "We have arrested Home Guard Kashinath Bera and civic volunteer Pritam Bhattacharya. We are hopeful that some information will come out during their custodial interrogation, which will help us get to the bottom of the case," Manoj Malviya, Director General of Police, told the media "We assure that the facts pertaining to the case will be revealed within 15 days as committed by the Chief Minister," he added. Reacting to the demand for a CBI probe into the matter, Banerjee said, "How many cases the CBI has been able to solve? What happened to the Tapasi Malik murder case? What happened to the Nobel prize theft? No one has been arrested in Hathras yet." The DGP said that the special investigation team is facing obstructions from the family members of the victim and some political groups, which is creating problems for conducting the probe.

"We had asked for the victim's mobile phone which is lying with the family, but they refused to hand it over. Not only that, we wanted to exhume the body and conduct a second post-mortem in front of a judicial magistrate, but that was also not allowed by the family," the DGP said. "We would like to request the family members and all the concerned parties to allow us to conduct the investigation properly. I assure that everything will become crystal clear soon. We are conducting an impartial probe and we are committed to bring the truth out within 15 days," Malviya said. Sources in the police, however, said that it is now clear that on the night before the murder, two police vans from Amta police station went to Anis' home, and they were the last people to meet the student leader. "There is no doubt that the police went to their house, but what happened after that is still not clear. The police are trying to find out the details," a senior police officer said. Earlier on Tuesday, the state government suspended two policemen and a Home Guard for dereliction of duty. The suspended security personnel are -- ASI Nirmal Das, Constable Jitendra Hembram and Home Guard Krishnanath Bera. Bera was arrested on Wednesday. When asked whether there was involvement of any other policemen, Malviya said, "We are interrogating many others, but it won't be fair to share the details at this stage of the investigation. We are hopeful that we would be able to provide further details in another couple of days." Meanwhile, the SIT headed by ADG (CID) Gyanwant Singh has interrogated the officer-in-charge of Amta police station, Debabrata Chakraborty, and second officer Pritam Bhowmik in connection with the case. They have been asked to clarify why the police reached the murder spot late and why the basic formalities of the investigation were ignored. They have also been questioned for their alleged misbehaviour with the family members of the victim. There are also indications that the SIT might question the SP of Howrah district (Rural), Soumya Roy, who claimed that Khan had a POSCO case registered against him and the police were looking into the possibilities whether that had any connection with his murder. The investigation team, surprised at the sudden revelation of Roy who also happens to be the husband of Trinamool Congress MLA Lovely Moitra, might question him on this point. Anis Khan, a former Aliah University student, was allegedly thrown off the terrace of his residence in the dark of night by the assailants, who visited his home identifying themselves as personnel from the Amta police station, as testified by his father who was held at a gunpoint when the assailants committed the murder. The father has called for a CBI probe into the incident. The incident became more complicated when a letter came to the fore wherein Anish had written to the officer-in-charge of the Amta police station that on May 22, 2021, a blood donation camp was organised in his village by the the Jana Swasthya Suraksha Committee under his leadership. But on the previous day, along with the gram panchayat deputy chief (Upapradhan), local Trinamool leaders such as Malek Khan and his elder son Masood Khan along with their acolytes warned him against organising the camp and threatened him of dire consequences.